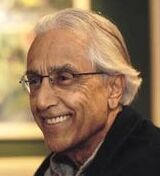 Influences & Offerings | Raimon Panikkar | Raimon Panikkar Library | Thomas Berry | Christine Stewart Price  | Carmelite Spirituality  | Enneagram | Links
The valuable work of Diane and Teresa at Skyline Harvest provides a marvelous example of what it means “to stand under the spell of the Earth” in response to the calling to integrate human, natural and spiritual wisdoms.
Raimon Panikkar

Philosopher and theologian Raimon Panikkar is one of the major influences in the unfolding of Skyline Harvest. His spiritual vision of the inter-relating human, cosmic and divine dimensions of reality deeply influenced Diane as a young religious studies student at the University of California at Santa Barbara where she first met Raimon. She continued contact with Raimon until his death in August of 2010. Click here to read her reflections after his death. Raimon Panikkar’s credentials are impressive, with PhD’s in chemistry, philosophy and theology. Cross-cultural in his bones, his mother was Spanish-Catholic and his father Indian-Hindu. He was also a Catholic priest who said of his own spiritual journey: “I “left” as a christian, “found” myself a hindu and “return” as a buddhist, without having ceased to be a christian.” He is known worldwide for his work in intra- and inter-cultural and religious dialogue. Yet this was not the measure of the man. What made him truly the spiritual master was his capacity for presence, his joy of life, his total engagement with the moment.

He perceived reality to be tri-fold, constituted by the cosmic, human and divine dimensions, each irreducible to the other, but each inextricably related to the other. What this means is that the human is not elevated above the natural world, or the divine elevated above the human. These hierarchies, which have served to alienate modern humans from the natural world and God from the earth, are challenged by a vision that sees each of these as irreducible dimensions of one and the same reality. Nor is the human denigrated as the cosmic dimension assumes its proper stature. Today we often hear that the earth would be better off without humans, but the cosmotheandric vision understands human consciousness as permeating everything. As Panikkar said: a cosmos without Man and consciousness would not be and is not, certainly, the cosmos we inhabit. And in regards to the divine dimension (which he understands to be the dimension of freedom, of interiority, of depth and infinite possibility), he continues: A cosmos without this divine urge, this dynamism built into its innermost core, is surely not the cosmos we experience.

The cosmotheandric intuition which Panikkar articulates represents the emerging religious consciousness of our times. Here at Skyline we are committed to bringing the spirituality of this radical trinitarian vision into our lives and into our service of those who come here. As Panikkar summarizes: Service to the Earth is divine service, just as the love of God is human love. All that remains is for us to spell it out in our own lives.