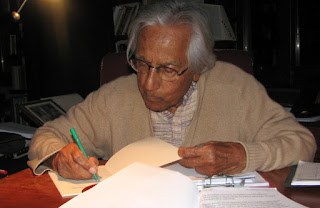 Called one of the greatest theologians of our time, Raimon Panikkar is the author of 55 books and over a thousand articles in more than a half dozen languages. Before his death, Raimon named Skyline Harvest as one of five centers throughout the world to house an official library of his works. Skyline Harvest continues to gather Panikkar’s work in both their original and English translations. We also house works about Raimon Panikkar and reference and support materials used by Panikkar, as well as seminal works in philosophy, theology and religion.

Raimon Panikkar in his office at Tavertet, Catalunya

We are especially grateful to Yakshi Vadeboncoeur and the late Roger Rapp for their vision and insight without which the Vivarium Library at Skyline Harvest would never have been conceived. Roger preceded Raimon in death but leaves this library as a memorial to both of them. Roger wrote of his vision for the Library:

To meet the most important challenges for the 21st century, our aim is that the encounter of cultures, inter-religious dialogue and the meeting of spiritual traditions continue to be promoted on a practical and personal level, studied in a scholarly manner, and celebrated on a spiritual plane. As the name Vivarium (“lived experience”) implies, we envision the Library as a space dedicated to deepening the awareness of peace and ecosophy by remaining intellectually alert, living in close contact with the rhythms of the earth and engaging in spiritual communion, not necessarily with those of like mind, but of like heart and spirit.

“I am delighted to be collaborating with Diane and Teresa in the establishment of a Vivarium Library at Skyline Harvest that will encourage future generations to develop a deeper understanding of the themes that I have been attempting to articulate my entire life such as the cosmotheandric reality, the encounter of religions, ecosophy, interculturality, pluralism, and dialogue.”